A unique 95 year-old adobe shed, rescued from its original location on the old Hindorff property at the SE corner of Gird and Reche Rd, is being reassembled by the Fallbrook Historical Society on the grounds of the Reche schoolhouse.

In the 1920s, needing a cool place to store canned fruit along with tomatoes, grapes and berries grown on the property, Eric Hindorff constructed an adobe for a storage shed, using a design for the roofline and eaves much like those of buildings found in Sweden, but overall reminiscent of early California Spanish-Indian influence.  Eric also used the adobe to store the Native American relics he found in the area.

These items are now on display at the Historical Society museum.

Fallbrook pioneer Eric Hindorff (1883-1963) was a wolf trapper, a bee inspector, olive tree farmer, and popular violin player at community gatherings. The Hindorff family is a vital part of the  history of greater Fallbrook. In addition to being a deputy sheriff, Eric became the caretaker of Live Oak Park, next to his home, for the many years these grounds were being operated by the Fallbrook Chamber of Commerce, prior to the county taking over the park in 1960.

The historic adobe stood next to the Hindorff family home that Eric had built in 1911. When the Hindorff property was sold in recent years, new owners were thinking of demolishing the old adobe, but allowed the Historical Society in 2016 to dismantle the adobe piece by piece and move it across the road to the schoolhouse grounds, where it has been kept awaiting funding to be restored. Now, this piece of Fallbrook’s history is being carefully reconstructed just a few hundred yards from where it stood for nearly a century. 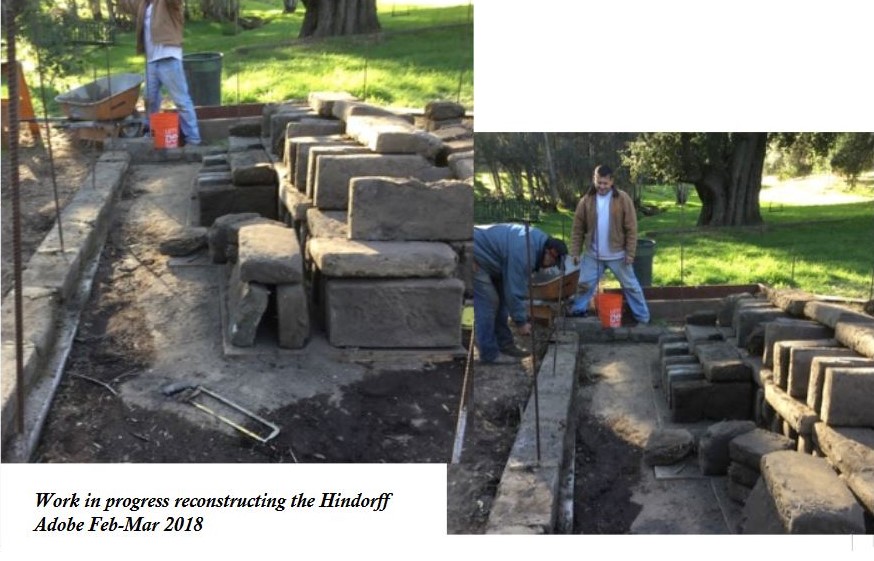