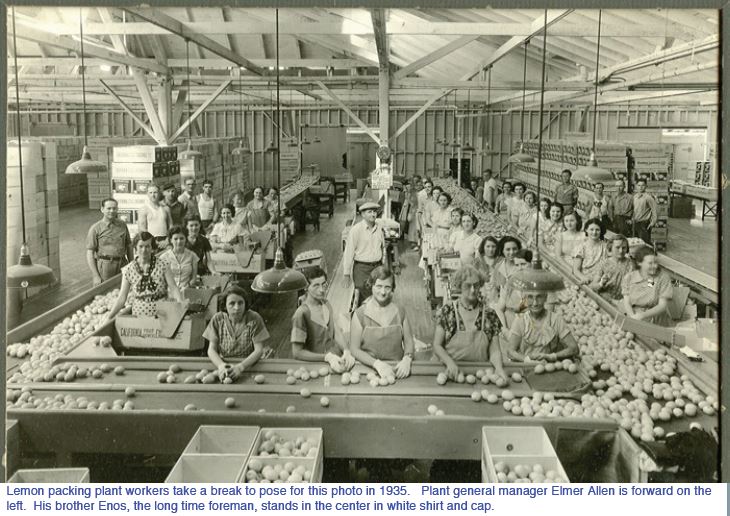 From 1916 until 1984 many of the townspeople in Fallbrook were employed at the lemon packing plant at 202 W. College St.  The packing plant occupied a square block roughly between today’s Mission Rd. and Pico St.  In the 1940s the Fallbrook Association employed about 300 people during peak times.

Strangely, the disastrous floods of January 1916 would lead to prosperous times for Fallbrook.  When the railroad washed out in Santa Margarita Canyon and hindered transportation to the Escondido and Pomona citrus packing plants, Fallbrook farmers realized they should work together to ensure they could always get their citrus crops to market.

The larger growers, led by Red Mountain Ranch, organized the Fallbrook Citrus Association (FCA) as a branch of the California Fruit Growers Exchange.  Albert Clemmens was elected as first manager of the Association.  The FCA obtained a loan and began operations by renting the old olive processing plant on Loma Ranch (where Fallbrook Fertilizer is located today) while a larger packinghouse was being built nearby.

These moves helped persuade the Santa Fe railroad company to commit to building a $10,000 train depot in Fallbrook and to bring the new railroad line directly through town starting in 1917.  The modern packing plant had electricity installed as demanded by its machinery.  New housing began to spring up around the packing plant.  SDG&E began extending its network around Fallbrook and electric lighting thus became more widespread.

The FCA was immediately popular.  Landowners with only a few trees, who used to get nothing but homemade lemonade from their fruit, could now join the local Association and sell their lemons for $4 a box.  Small growers began pruning, fertilizing and irrigating their trees to produce more fruit.  The FCA hired pickers and assigned them wherever they were most needed to fill a rail car.  The expenses of picking, packing, and curing lemons were being distributed within the Fallbrook community.  These jobs attracted seasonal workers and whole families began to move here.  Temporary housing was built across the street where the Maie Ellis School is currently located.  Soon small cottages sprang up around town.

The Fallbrook Citrus Association sold the business in 1984 to a privately held company.  The building burned down in August 1990.  Today Fallbrook Equipment Rentals and Citrus Plaza Self-Storage occupy this location