While the image of a stagecoach on the left may be what comes to mind when thinking of the inspiration for our Stage Coach Lane, Old Stage Road, and other like-named streets in Fallbrook, the image on the right is more likely to be what was frequently used as it was in this photo bringing guests the Francis E. Willard Hotel in West Fallbrook.  The hotel later became The Naples and then later the Hotel Ellis.

More than one road around Fallbrook has the word Stagecoach in its name.  A couple of older buildings carry reputations, built on rumor, of having been stagecoach stops long ago.  Read on.

Fast moving horses pulling a mail wagon or passenger carriage generally needed to be replaced with a fresh team roughly every 20 miles.  This is called a “stage”.  The wagon or carriage being pulled would have sometimes been called a “coach”.   Small stations with a corral or stable of fresh horses were established along a route at each stage.

Stagecoaches first appeared in the San Diego region in 1852 with the establishment of erratic service between San Diego and Los Angeles.  Stage lines operated to the east, west and south of Fallbrook, but there was never a stage station here in Fallbrook.  However, the U.S. mail was delivered to the Reche post office in the Live Oak Park vicinity between 1878 and 1888.  Besides the mail, these ‘mud wagons’ may have sometimes carried paying passengers to the hotel in Fallbrook.

To the east of us, the famous Butterfield Overland Mail Route operated during the years 1857-1861 from St. Louis to San Francisco. Instead of going due west across the mountains, Butterfield picked a more southern route to stay open during the winter.  Entering California along the Mexican border at Yuma the route covered much of northern San Diego County.  Traveling northwest on the way to Los Angeles via Temecula, the Butterfield stages followed the old Southern Emigrant Trail with stops at Vallecito (Borrego Springs), Oak Grove, and Warner Springs.  Today, these restored historic sites are designated as official San Diego County landmarks.

Wells Fargo eventually took over the Butterfield line, using the classic covered Concord carriages that we think of when we hear the word stagecoach.  These carriages could accommodate passengers both inside and outside.  Guess which ones were the cheap seats.  Stagecoach operations were suspended during the Civil War in the 1860s. Remember, the Fallbrook settlement did not even exist prior to 1870.

In 1885, stagecoach travelers wanting to visit Fallbrook could rent horses and a wagon at San Luis Rey and follow the road along the south side of the San Luis Rey River (Old River Road) to the crossing at Mt. Fairview (Bonsall).  From there they would have taken today’s Olive Hill Road.  It’s clear on today’s maps that Olive Hill Road drops down to Mission Rd. at Stagecoach Lane, which leads to Reche Rd. and Live Oak Park.

However, the Southern Pacific train from National City and running through the Santa Margarita Canyon was becoming the preferred route by 1882.  Fallbrook livery businesses operated “stages” bringing mail and passengers from the old train depot up today’s De Luz Road to West Fallbrook, with a possible stop along the way.   By 1888 the Reche Post Office had closed in favor of a new post office in West Fallbrook.

Trains and motorized vehicles eventually caused horses and their carriages to disappear from Fallbrook streets. In 1912 the Pickwick Stage Line advertising in the Fallbrook Enterprise was operating between Fallbrook, Oceanside and Los Angeles using a model T Ford.

Judge Benjamin Hayes diaries describing his travels as the first judge of the district court that served Los Angeles, San Diego and San Bernardino Counties from 1849 to 1875. 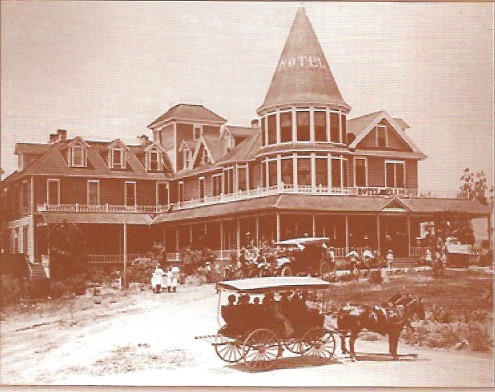 View past featured article in our Archives