Barney Pattten, son of John and Evelyn Patten was born in Gopher Canyon January 19, 1914 at his grandparents home. Dr. Reed of Oceanside was the attending physician. Barney had four siblings Jess, John and Violet, all deceased and his sister Marguerite (Mrs. Walter Church) who is living in Vista.

Barney has lots of memories about the old times in Bonsall and enjoys talking about the old hotel, creamery, library, the Stevens Store, blacksmith shop, and hotel. One point of interest was the tether rock, (a large boulder partially buried with steel rings attached). The rings were used by the blacksmith or anyone else to tie up their animals. He tells of the time he was learning to ride a bicycle when a neighbor girl who was holding him upright pushed him right at the old tether rock. To keep from running into the rock, her had to fall off the bike.

There was a proposed dam to be built where the abandoned Bonsall Bridge is located today. Someone bought land along the river, but never built a dam.

Barney attended Bonsall Grammar School for eight years. During these years he made many life-long friendships with the Indians of Pala.

At Fallbrook High School he participated in sports playing softball, baseball and basketball. The baseball team win a league championship.

Barney graduated with the class of 1932. Barney had a desire to gain further knowledge about agriculture, so he returned for a fifth year. This was called “post graduate classes.” He credits his Pala Indian friends for his being elected the very first president of the Future Farmers of America at Fallbrook High School in 1933. Students would go out to the local ranches and graft nursery trees but they never got to go back and see if the grafts took.

In 1918 Barney’s father, John Patten, was working for George Stevens in his general store. The Pattens purchased the Steven’s store, with living quarters in the rear, and operated the store until Jon’s death in 1937. The old store the Pattens bought had square nails, a redwood counter, a huge old coffee grinder, and a cheese cutter. Besides the store there was a library, a blacksmith shop, a store across the street and 2 or 3 house with barns and corrals. All of this was where the Bonsall Community Church is now located. Along about 1936 when the Bonsall Bridge was opened to traffic, business dropped off and the Pattens closed the store. Evelyn continued to live in the old store building unthil the early 1940’s, whn the building was sold and the new owners moved it to near the San Luis Rey Gate of Camp Pendleton.

Barney commented about how there was not the entertainment in the home (TVs, computers etc.) that is available today, so he played baseball. There were many adult teams playing at the high school diamond and in the surrounding towns. Barney told of how he was the only white boy playin on the Pala Indian team. The coach was not happy with a white boy playing on his team, but the other eight members of the the team convinced the coach tat Barney was going to play ball with them.

After High School graduation, Barney went to work as a custodian at the Bonsall School and drove school bus replacing his father when he became sick.

Barney delivered milk to restaurants from a dairy which was located on North River Road. Later he went to work for Jess Boren who had the contract to haul sand and gravel from Oceanside near College and Vista Way to Palomar Mountain during construction of the Observatory. THe trip took between three and four hours, he had to shovel the sand or gravel off the truck by hand, and he was paid $3.00 per trip. TO get up to the observatory location they drove up the steep Harrison Grade on the west side of Palomar Mountain. The trucks would heat up and the radiators would boil over. One day one of the mechanics decided to install a water tank on top of the cab of the truck with metal tubing leading into the radiator. the truck engine started heating up, whereupon the driver opened the valve. Shortly the tank exploded!

Later Barney went to work at the lemon -packing house and also drove the high school bus from Fallbrook to Pala and Pauma each day. He drove this bus for five years and was paid $90 per month for this work. Some time in 1941 Barney went to work at the Naval Ammunition Depot and got Mr. James Potter, the high school principle to give his bus driving job to Jimmy Banks, his long time friend and teammate from Pala.

He became an ordinance man at the Naval Ammunition Depot and work for about 20 years, retiring at the age of 58.

Barney married Florence Huscher on October 31, 1947 and to this marriage Ron was born January 1, 1952. Barney has a daughter Karen, born in 1942, from an earlier marriage.

Hunting and fishing were past times that Barney thoroughly enjoyed. He spent a lot of time hunting throughout the De Luz area.

The Pattens purchased five acres with a house near the intersection of Old Stage Road and Palomino Road. They planted it with avocados. He sold the avocado grove and house, and bought a home on Hillcrest Lane.

On November 14, 2004 Barney lost his beloved wife Florence. When interviewed we saw that he is still full of fun and enjoyed remembering some of “the good old days.” 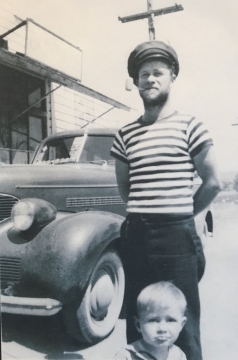 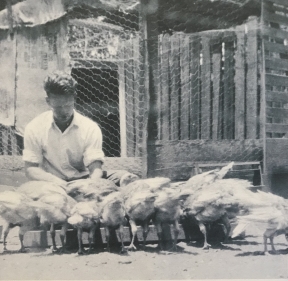 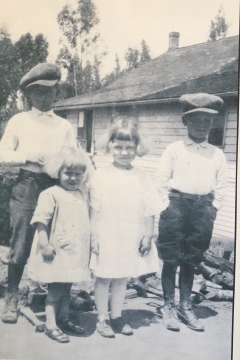 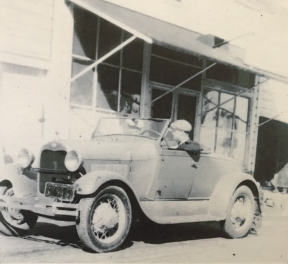 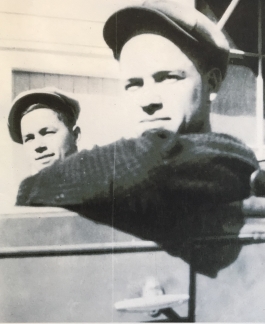 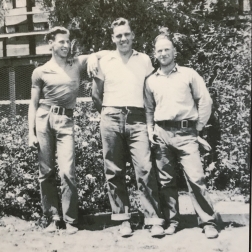 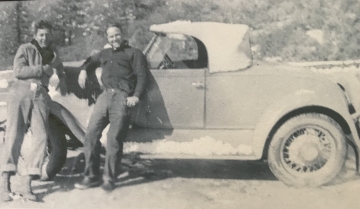 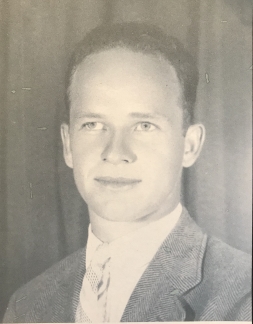 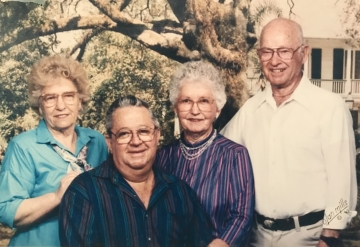 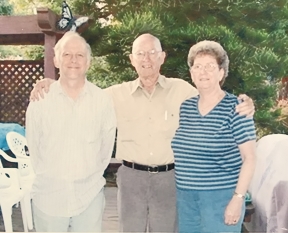